Kelsey and I have always been HUGE disney fans. From knowing all the words to the 1990s classics (self defined golden era), to having visited the California Disneyland park close to 20 times – saying we were fans would be an understatement.

On this trip around the world we quickly realized that we would be visiting many major cities and knew what must be done.. complete the Disney park global list – all 6 resorts! We’ve been to 1) Anaheim California and 2) Orlando Florida, which left the 4 other parks outside of the US – 3) Hong Kong, 4) Shanghai, 5) Tokyo, and 6) Paris.

We’ve now officially gone to 5 of the 6 Disney parks (whoa!) with Paris to come later this year. In this post we’ll be covering our highlights of all the Asia parks! Jump onto our international magic carpet and come along for a ride (too cheesy? not possible). 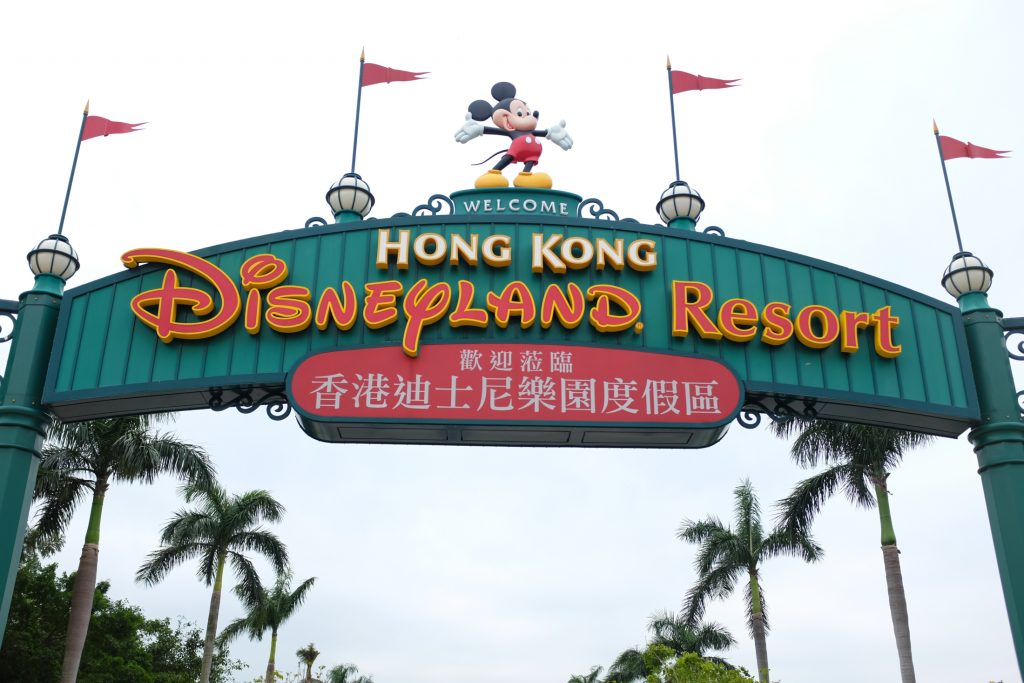 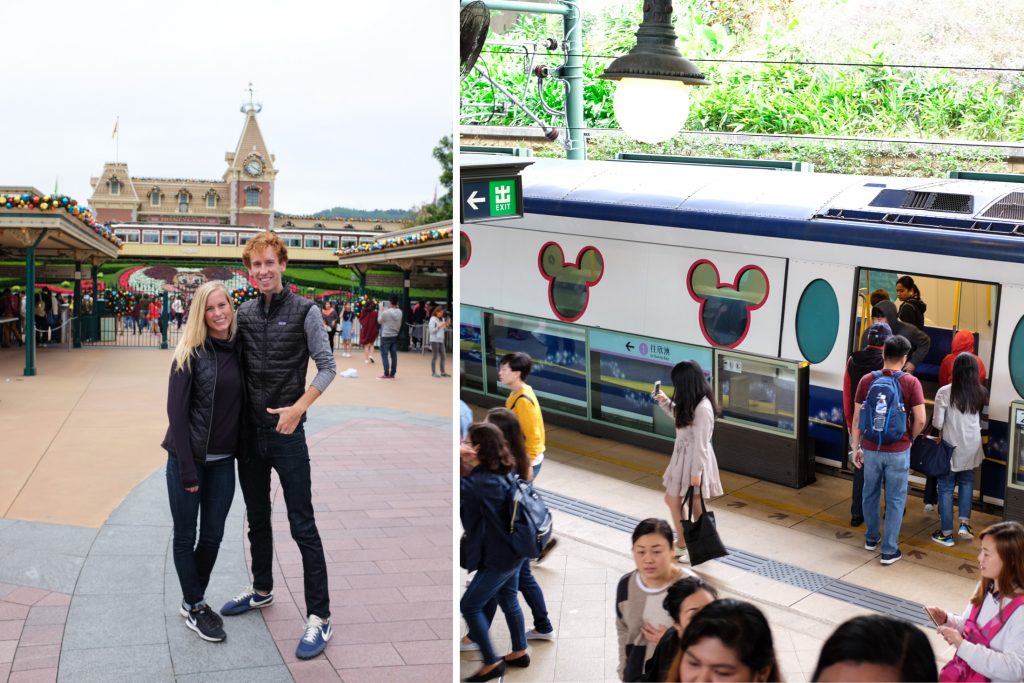 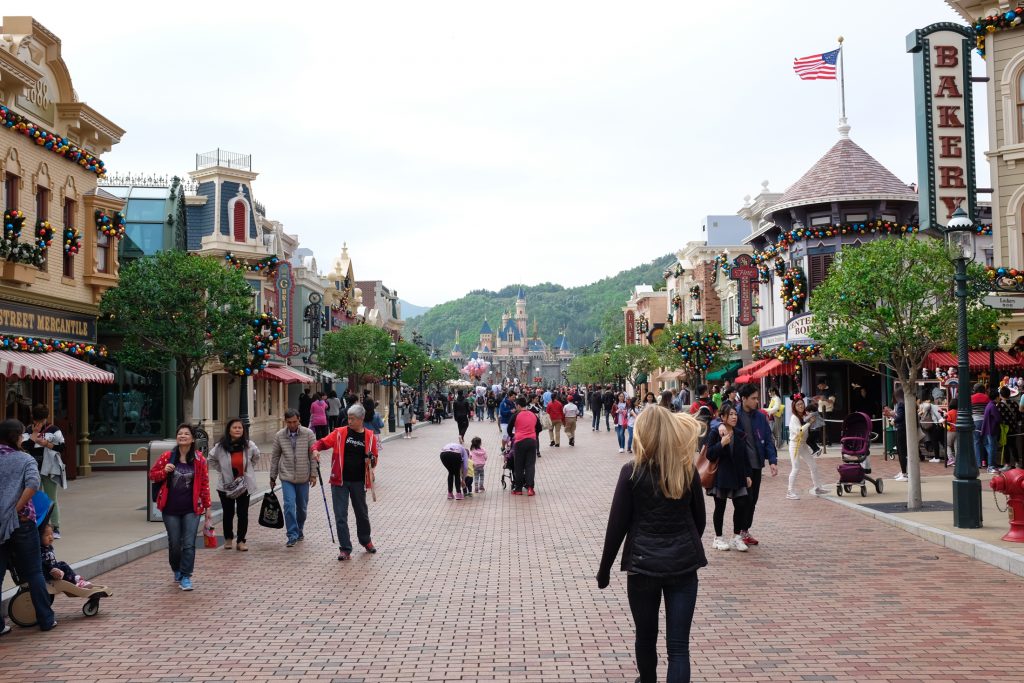 The 2nd Disney built in Asia (2005), this park is compact and adorable. It is the most similar of the international parks to the US Disneyland but about 1/2 the size. This park is fun because you can do EVERYTHING in one day; rides, shows, parades, and fireworks. Everything is in english and there are beautiful green mountains surrounding the park. It rarely gets packed here so keep your pacing slow, savor, and enjoy.

Start your day taking the special Disney subway line into the park (Mickey shaped windows and handles, with custom interior). Inside the park there are 7 lands with 3 specifically unique to Hong Kong: Grizzly Gulch, Mystic Point, and Toy Story Land. We loved the Big Grizzly ride (has a fun twist at the end) the Princess castle garden with detailed miniature castles, and the Lion King show that is only a notch below the broadway version (which is saying something). Apparently ticket sales at this park are lower than they predicted, so hopefully that turns around, but not having a wait time exceeding 20 minutes made us feel like like we had the park to ourselves – what a treat!

Recommended days: 1 day
English: All shows english (including dialog)
Best show: Lion King
Favorite ride: Big Grizzly Mountain Runaway Mine Cars
Unique Food: Warm pineapple bun,  Main Street Cafe
Downtown Disney: None
Fun Fact: Each cast member has a satchel of stickers and will give them out upon request. There are many different stickers so try to collect them all! 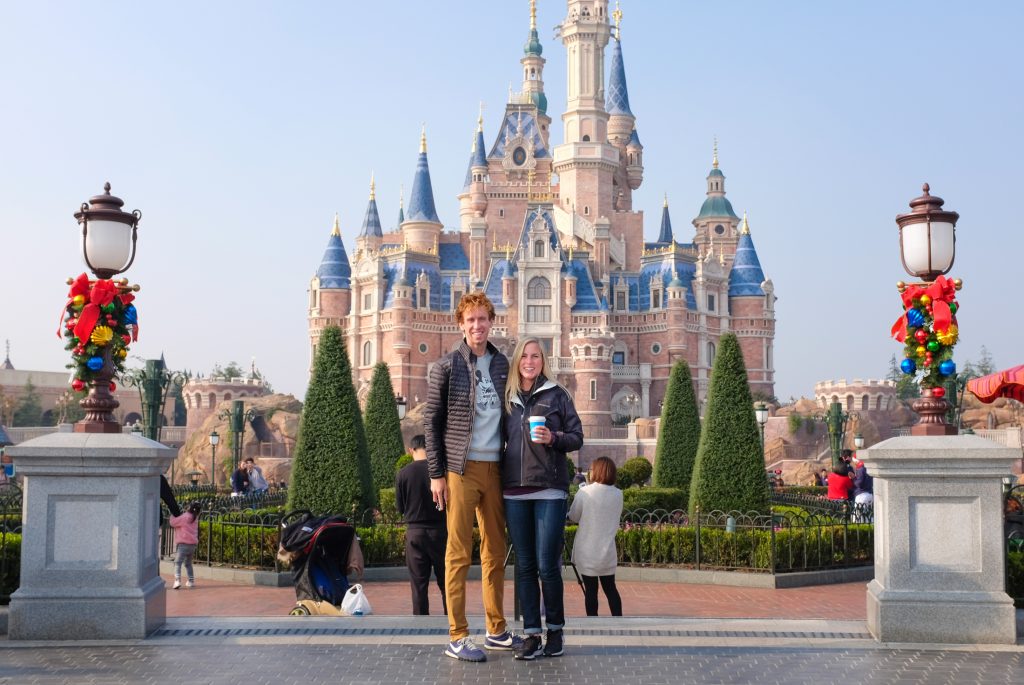 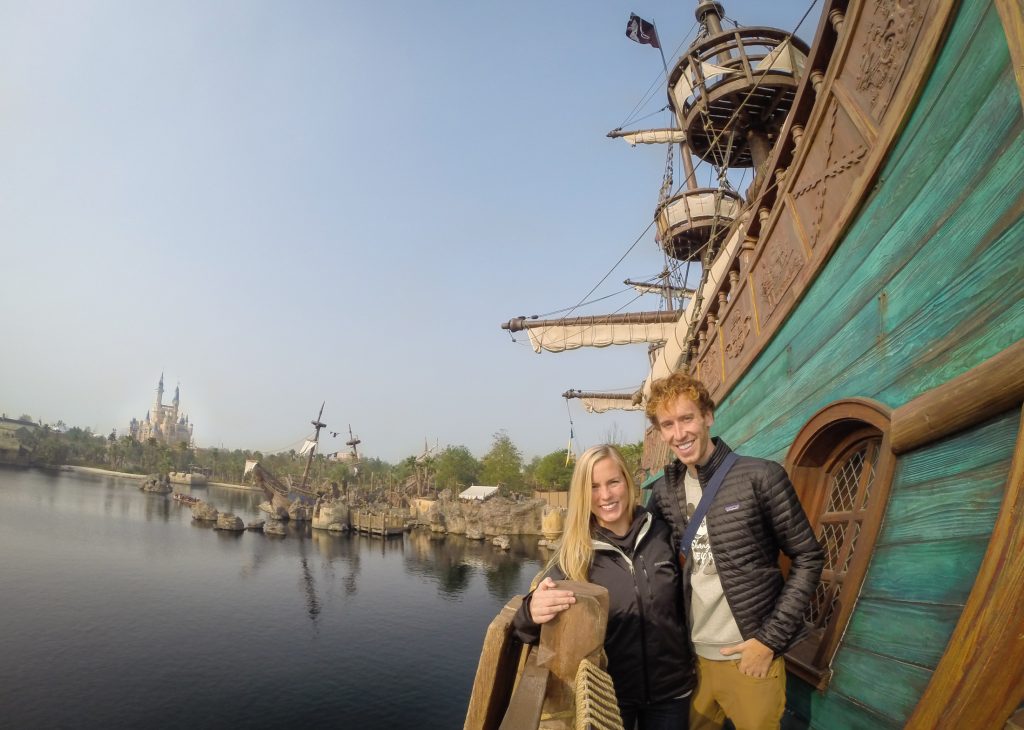 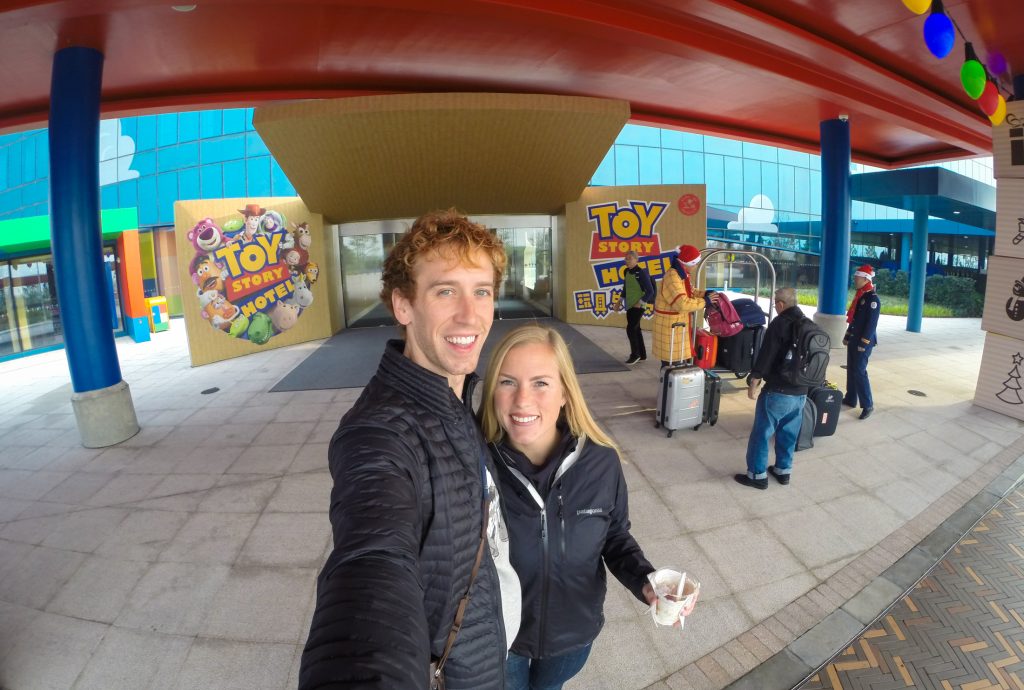 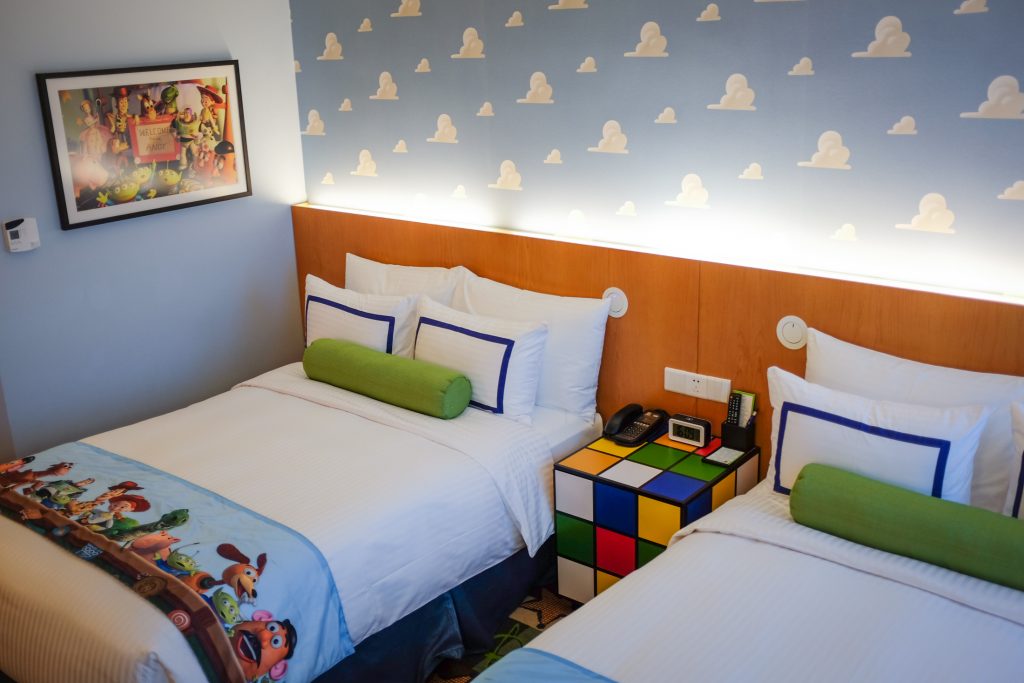 This park is brand new and had only been open for 5 months when we visited. It really added to the magic that every piece of the park was fresh and clean  (is this what it felt like when the first park opened in 1955?). Shanghai Disney has been a long time in the making with China needing to approve every aspect of the park, down to renaming all the main street stores to non US names. The world has been in anticipation for the past decade and you could feel the excitement for the park to be finally be open! The Shanghai park is slightly bigger than the US Disneyland (Anaheim) although China has the largest castle of them all (a restaurant and an interactive walking attraction are built inside!).

By far the coolest feature about Shanghai Disney is Treasure Cove, a themed land entirely dedicated to Pirates! This land has a show, an interactive Black Pearl docked ship that you can go on and explore, and an epic tech-revamped version of the Pirate of the Caribbean classic ride. This ride is a pirates fan dream come true, with your boat floating through an epic battle between the Black pearl and the Flying Dutchman. We recommend going on this ride a few times to fully appreciate it. This park also has a Tron ride in it’s Tomorrowland that is worth doing (you get to ride a Light Cycle, front row is mandatory). Our favorite show here was Tarzan, which is gymnastics focused and fantastic. While 90% of the songs and dialog are in Mandarin, the park is still highly enjoyable.

We also had the privilege of staying in our first Disney resort hotel – the Toy Story Hotel! It was tastefully themed, with modern Woody and Buzz themed floors, unique cafes, and perfectly detailed rooms. The only reason we ever left this amazing hotel was because there was a theme park waiting for us!

Recommended days: 2 days
English: Almost zero english (all dialog and even most songs in Mandarin)
Best show: Tarzan
Favorite ride: Pirates of the Caribbean
Unique Food: Authentic chinese at Wandering Moon Teahouse
Downtown Disney: Yes (very cool one!)
Fun Fact: This is the most affordable Disney themed hotel with a night at their Toy Story Hotel being around ¥850 ($125 USD) – and so fun! 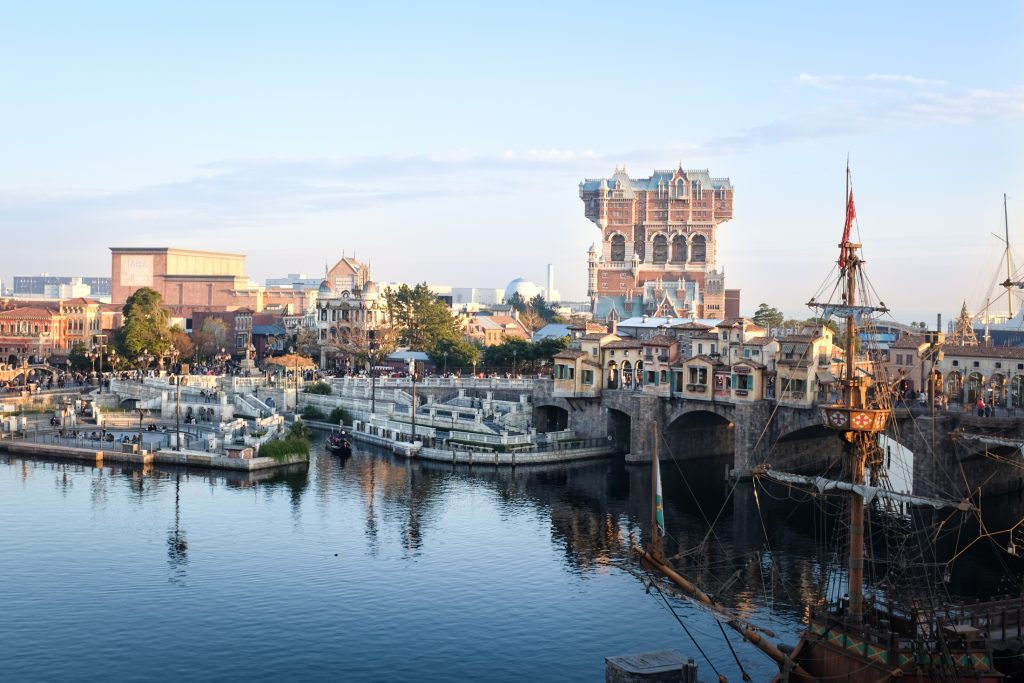 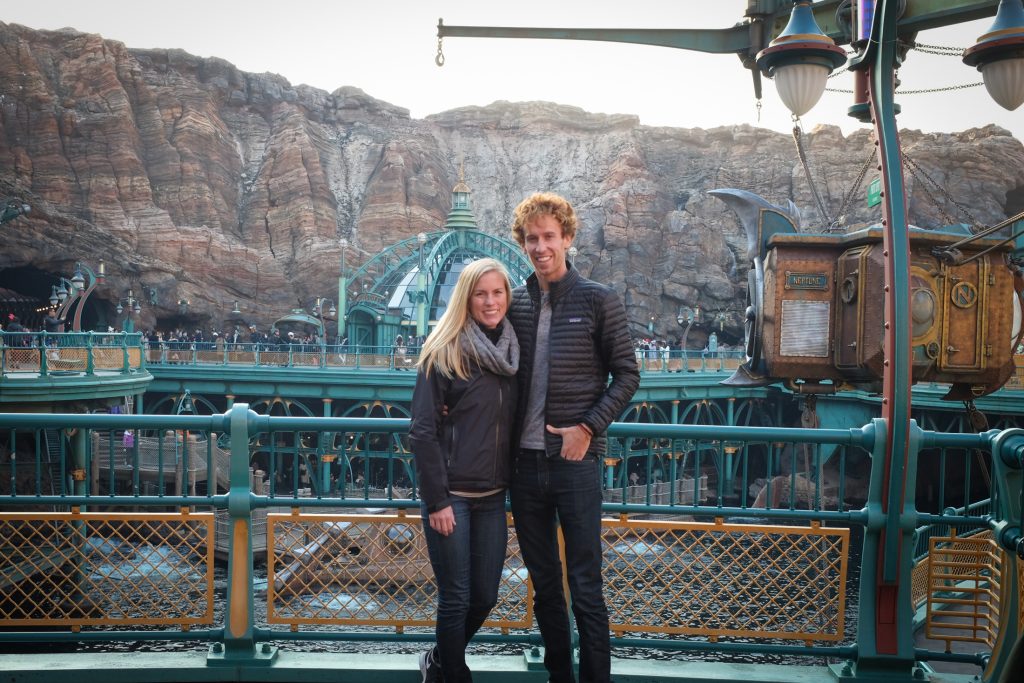 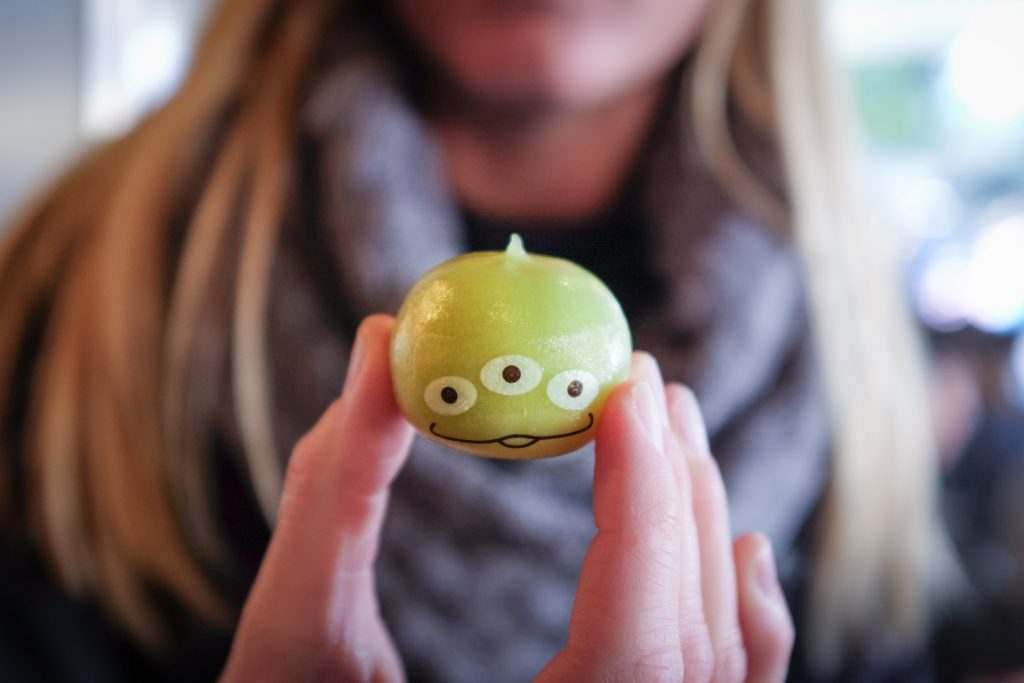 These parks were amazing! The Tokyo Disneyland is definitely something not to miss, but I’m going to focus on the park that’s truly unique in Tokyo – Disney Sea! This park is special because its theme “ports of the world” is so different from any Disney. They have 7 lands: Mediterranean Harbor, Mysterious Island, Mermaid Lagoon, Arabian Coast, Lost River Delta, Port Discovery, and the American Waterfront. You need at least 2 days to fully explore all the nooks and crannies. The shows are not to be missed as several take place on the lake in the middle of the park.

Our favorite rides at this park were both in the Mysterious Island land. The 20,000 Leagues Under the Sea and Journey to the Center of the Earth both were exciting and so different than anything else in other Disney parks. Capturing the dark and eerie vibe they were going for perfectly. The Big Band Beat Jazz show is on par with New York broadway quality and famous at Tokyo see (get in line an hour before show time). In the evening we recommend grabbing a drink at the Teddy Roosevelt Lounge, located in a giant boat docked along the American Harbor. Again the theming in this entire park is worth you slowly walking through each land and enjoying the fine details.

Recommended days: 3 days (1 at Disneyland, 2 at DisneySea)
English: Limited english (some english subtitles)
Best show: Fantasmic!
Favorite ride: Journey to the Center of the Earth
Unique Food: Alien Motchi balls! (also Chandu tiger tails)
Downtown Disney: None officially, but Ikspiari Mall is an attached partnered mall – still cool.
Fun Fact: Tokyo Disney Sea was built in 2001 as a park geared towards adults with no Mickey specific theme-ing. They quickly decided to add back in these younger elements to attract all ages, but the older theming and details they originally placed here make this park feel very specialized.

All 3 of the Asia Disneys had one thing in common – an extreme undying passion for… Popcorn! Each park had their own set of popcorn character caring totes.  Locals could bring these back to the park for a refill discount and to look cool (obviously). It was fun to see discontinued characters that guests would carry around their necks with pride. Each park also has their own flavors with the popular ones drawing long lines to their carts. Some of the unique flavors we saw were cappuccino, soy sauce/butter, and curry. The park maps even had a little section dedicated to popcorn and the location of special flavors. *This dude’s blog (TDR Explorer) has a ton of info on Disney popcorn. 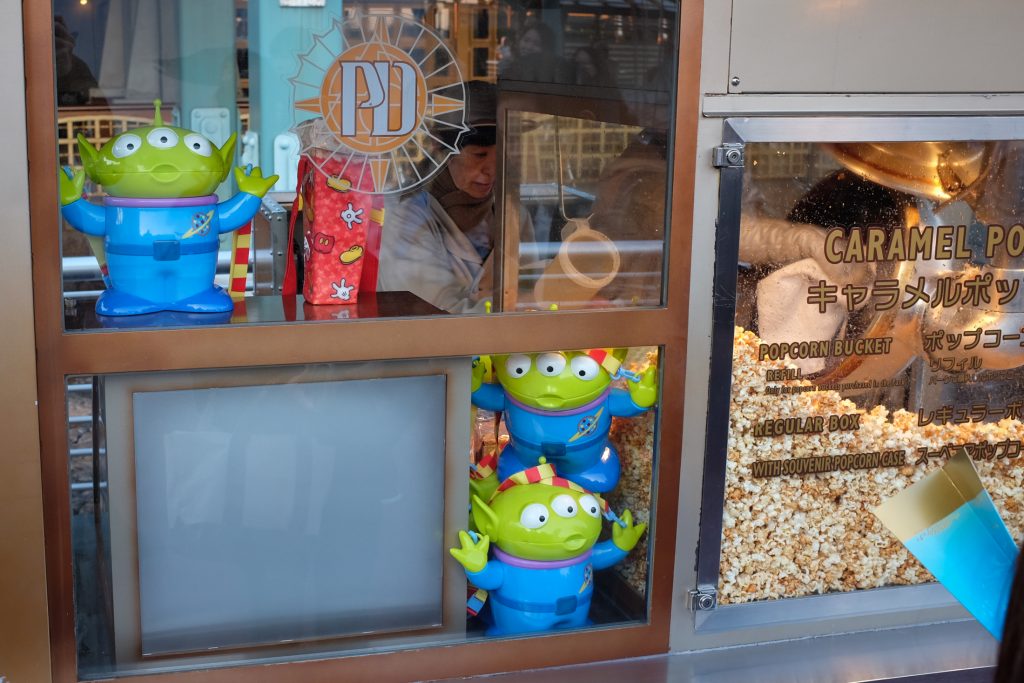